Our first stop on our trip from Texas to Guatemala is Alaska. No, really. More on this in a minute.

Heidi's graduation was last Saturday night. It was fantastic. Her parents, her aunt and a family friend, and her in-laws were all there. She was awarded the "Outstanding Chief Resident" award, making it the 3rd year out of 4 that she was recognized as the outstanding resident at her level. (Can you tell that Matt is writing this part?)

The night before was a going away party we threw for ourselves with the help of our friend Liz. Matt's band was able to get together one last time to play. Heidi's family had never seen Matt play and they were all able to be there, thanks to some last minute work by God (cancelled flights, closed airports, weather delays - all overcome by the creator of the universe).

This past Sunday, some friends came to relieve our apartment of all its furniture, dishes, kitchen utensils, towels, sheets, televisions, lights, and basically anything we can't take to Guatemala. It looked like an explosion in a mattress factory here!

Two days of cleaning, sorting, "letting go", moving, and packing, and we're staged for the next three weeks. All of our "going to Guatemala" stuff is at Roy's office, to be sent down with the next two mission teams. All of our "going to Alaska" stuff is in our room, packed in suitcases. Most of our "being stored in Michigan or North Carolina" stuff is in the trunk of our car and UPS has the rest. And all of our important business stuff is at Ray's house/office.

Oh, and somewhere in there, Heidi took her board exams and Matt closed on our house. It's been a long two weeks!

Thanks for keeping up with us. We appreciate your interest and your prayers. Please keep us on your prayer list. Ask God to help us unwind over the next few weeks and charge our batteries for our new adventure. It's almost here!!!!
Posted by Agape In Action at 9:10 AM 7 comments: 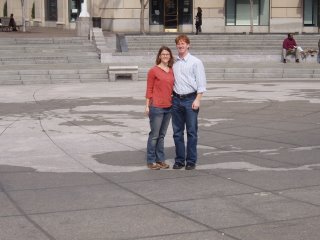 One of the things you don't always think about when you're looking forward in life is that you have to end the current chapter before you open the next one. It's all part of the natural process but it still seems to sneak up on you every time. Leaving is exciting because we're looking forward to new things. But it still means that something is going to be over. We have to say good-bye to people, places, and things that have been central to us for several years.

We got a few pieces of that this past week. The folks at Matt's job threw a Going Away party for him this past Wednesday. Since Heidi's on nights, she got to come. She had never been on a chemical plant before, but she said it was like being on a field trip! Bruce and Kwa did a great job of roasting Matt - like he didn't know THAT was coming. Again, going forward is exciting, but looking back can be hard. He's been going to work there every day for over 10 years. Big change.

This past Friday night was Matt's 3rd to the last show with Todd, Tod, Trip, and Billy. One more on Wednesday, then Heidi's graduation party on Friday. Those guys have been like brothers and it's going to be very hard to say good-bye. Matt's been playing with Tod Stark for six or seven years. He's been playing with Todd Howard for five or six, with Trip for two, and with Billy for two or three. He and Billy even lived together for over a year. God has been very good to provide such great friends.

Heidi has finished her last full week of work. She'll go in Sunday night for her last regular shift and turn in most of her stuff on Monday. (She still has one more "coverage" night on Thursday, but...) The hope is that she'll be able to keep in touch with many of her work friends, professionally and socially, but it's still a good-bye in a lot of ways.

Pray for us to smile and say good-bye with the knowledge that we'll see so many of our friends again in eternity, if not before.

(The photo above is from our recent trip to Washington, D.C. in March... In case you can't make it out, it's us standing "in Guatemala" at the Navy Memorial there-- Thanks to Daryl for totally humoring us by taking the Metro to an extra stop just to snap this picture for us!)
Posted by Agape In Action at 4:06 PM 5 comments:

After tonight, Heidi has six more work nights and Matt has six more work days. We actually started a countdown on our refrigerator about 50 weeks ago. Of course, we thought we were counting down to Heidi graduating her residency and us moving to North Carolina. That's still the plan, there will just be a bit of a side trip.

In case none of you know why we decided to do this, we should explain that we didn't decide to do this. It was revealed to us that this was the plan and we simply went with it. It would be hard to say when the chain of events started, but it probably goes back about 6000 years to the fall of Adam and Eve. You know much of the story for the next 5998 or so years (or at least the highlights) so we'll skip to 2004.

In September 2004, Heidi and Matt met on Match.com. In April 2005, we were engaged. An October 2005 wedding in New Orleans was planned. Tropical Storm Arlene, Hurricane Dennis, Hurricane Katrina, Hurricane Ophelia, Hurricane Rita, Hurricane Stan, and Tropical Storm Tammy intervened, each changing our plans in one way, shape, or form, and we were married at Heidi's Aunt's Beach House in Atlantic Beach, North Carolina on October 8, 2005.

Prior to that, though, we had been discussing Heidi's graduation and her anticipated return to North Carolina, hoping for her dream job, which is to be on faculty at the University of North Carolina Medical Center. God threw up some roadblocks and we were getting discouraged. A random flier from a private practice in the Rocky Mountains arrived one day in the mail and Matt asked Heidi whether she would consider living somewhere else for a few years, then moving to North Carolina. What better time could there be to live in a place you've always wanted to live? No kids, no big mortgage (yet), no real requirements... The possibilities are endless. Hawaii, New York City, Los Angeles, Key West, Denver... We tossed around ideas for a few minutes with nothing really grabbing us. Then Heidi mentioned that she really loved Costa Rica when she visited and it was like a fog had been lifted. We didn't HAVE to stay in the U.S. Then the ideas started to flow. We could go to Africa, the Amazon Basin, Central America - anywhere people needed help. We were so excited we didn't know what to do. We both knew that God had steered that conversation and we knew what we had to do about it.

Two or three weeks of internet searches for overseas opportunities proved fruitless. Everyone either wanted a lot of money (which we didn't have) or didn't take spouses. About the best we could hope for was a few weeks working in a mission and we knew we were supposed to do more. So what did we do? We prayed about it.

Rewind a few months to Heidi doing a rotation at Methodist Hospital in Houston. She had met an anesthesiologist who knew some people from her medical school - quite a surprise in Houston. East Carolina University trains doctors almost exclusively to serve in the Carolinas - a long way from Texas (in more ways than one!). How did he know these people? They had worked with him in his mission in Guatemala. Heidi remembered that conversation during our search and started thinking that she wanted to find this anesthesiologist again. Unfortunately, her rotation there was basically over and she knew he was actually retired and she might not see him again.

Well, by now you probably know that this anesthesiologist was none other than Dr. Street and they did, in fact, work together again. Heidi asked him during the surgery about his work in Guatemala, telling him that we were looking for something along that line and wondering if he had any contacts. Little did we know....

So that's how we met Dr. and Mrs. Street (Jim and Kathleen). There's a lot more to tell, of course, but it'll have to wait for another day. What made us want to write this was that we met them for lunch today and had a wonderful time sharing with each other how many different ways we've been able to see the Lord work in the past few months and excitedly anticipating what He has in store in the next few months. We firmed up our move date to Guatemala. We will be flying down on July 22, hopefully with Kathleen, to spend a day and night in Antigua with Savior's Sons, a Houston mission group who will be on their way back to the U.S., then riding up the mountain to our new home in Quiché.

Wow! That's a lot. Sorry for the long post, but there's so much to tell! Please keep us in your prayers as our time here in Texas draws to a close. It's the end of four years for Heidi and ten years for Matt. Change can be hard, but growth requires change and we know that we're doing the Lord's work. What better way to live?
Posted by Agape In Action at 7:41 PM 7 comments: