Sorry again for the long delay in posting. Life in the US moves at a little different pace than life in Guatemala...

We got a call from Aaron and Katie last week around 8:30pm. They were on their way home from clinic in Nueva Santa Catarina. This was one of our "solo" clinics that they are covering for us now.

They had between 60-70 patients - about double the normal load there - but were able to see them all and get them taken care of.

Just a quick note to those of you who are still following.

We are so thankful to God that He has provided a replacement for Heidi and Matt. Many of you close to the mission already know, but Dr. Sherwood Pope and his wife Areli will be moving to Guatemala in January to take over the reins for Agape in Action.

Dr. Pope is from Michigan and his wife is from Mexico City. We prayed for them long before we knew who they were and we will continue to pray for them now.

Please check out their current website at http://www.missionarydoc.com and keep checking here for updates!
Posted by Agape In Action at 11:40 AM No comments:

Safe and Well in Guatemala

We got news today that Don Allison and John Villanueva made it through to Guatemala.

Apparently, as usual, they had some adventures, but nothing too terribly scary.

They split up once they made it into Guatemala. Don went to Guatemala City to pick up his family at the airport and John went to Quiche to spend the night at the dorm. They should all arrive in Canilla later today.
Posted by Agape In Action at 11:35 AM No comments:

To anyone not familiar with Houston geography, all of our support team is directly in the path of Hurricane Ike. To the best of our knowledge, everyone is evacuated.

While Ike will not "make landfall" until the middle of the night tonight, Galveston and the surrounding areas started flooding this morning - more than 12 hours ahead of the full force of the storm.

Houston and all surrounding areas will be subject to severe flooding and crazy high winds. Almost everyone will take some type of damage.

Please keep the Shaws, the Leathermans, the Villanuevas, and the Allisons in your prayers, as well as the rest of the Houston metro area.

Matt flew to Atlanta this past weekend to attend the wedding of a friend he used to play with. It was beautiful! Many congratulations to Jared and Heather!

After the wedding, he flew to Houston to meet up with Don Allison and prepare for the drive through Mexico. There had been a slight paperwork mix-up, though, that generated a few problems.

Without getting into all the details, there is a waiting period of 72 hours from the time the US Customs Department receives your vehicle title until you can cross the border. Because of our mix-up, we won't be allowed to enter Mexico until Thursday.

It's about 28 hours of driving from the Texas-Mexico border to the Guatemala-Mexico border. If we crossed into Mexico by noon on Thursday, drove all night Thursday, and nothing went wrong (yeah, right), we would arrive at the Guatemala-Mexico border just as it was about to close for the weekend. Matt's flight out is set for Monday morning. There's virtually no way he could make that flight. So if the guys encountered more than a one hour delay in the entire trip, they would be forced to sit in a Mexican border town for two days, miss Matt's return flight home, and generally be miserable.

So we came up with Plan B. John Villanueva to the rescue (again).

John is vacationing in Chicago right now. He flies back on Wednesday. On Thursday, he and Don will drive to the Texas-Mexico border, fill out all of their paperwork on the US side, spend the night, then cross the border Friday morning. They have all weekend to make it to the Guatemala border (which means they'll get some nice time on the beaches of Tampico and Veracruz), then they can enter Guatemala on Monday. Matt will simply return to North Carolina tomorrow.

So, it looks like God knew what he was doing when he had John ride down with Matt in January. John will get one more trip added to his "experience list" and Don will get the help he needs. Additionally, the Fickers will get the 4-wheeler they've been waiting on for a couple of years.

About that 4-wheeler. In the area of Guatemala where the Fickers live, the "roads" are often impassible by car. So a 4-wheeler or dirt bike is needed. They have a couple of small 4-wheelers and several dirt bikes, but to really haul any medical equipment or accomplish a medical evacuation, a larger 4-wheeler is needed.

They have a big Honda Foreman 4-wheeler but it has almost 20,000 miles on it (and not easy miles, either!) It's becoming a bit inconvenient to keep it running as all of the parts have to be imported from the US. This 4-wheeler we're bringing down to them is a nearly new Foreman that has 4 wheel drive. So it'll be even better than the one they already have. Now they'll be able to get supplies and people to even more places than before!

It's important to remember that even when things do not seem to be working out the way you're hoping they will that God is always in charge. He will never close a door without opening a window....

If you're not watching the news, there is a hurricane drawing a bead on Houston as we speak. All of the fundraising staff here and their familes will probably have to evacuate. This includes John's wife and two kids (while he's on a trip to Guatemala). So please include all of them in your prayers.

We'll ask for prayers for the following:
* A safe, expedient, hassle-free and uneventful trip to Guatemala for John and Don
* A safe and easy evacuation for the Leathermans, Shaws and Villanuevas
* No damage or major inconvenience from the hurricane
* A safe trip back to North Carolina for Matt
Posted by Agape In Action at 1:12 PM No comments:

Sorry it's been awhile, but we've been busy here in the United States.

Heidi officially started work this week. She has a new office, phone, pager, schedule, etc. Matt's mom and dad are in town for a few weeks to help out with Isaac because Matt leaves in the morning for Guatemala (with one side trip).

We heard back from Aaron and Katie. They went to Chicabracan on Monday to cover our clinic there. It's so nice to know that our patients have not been abandoned, but are in outstanding hands. Katie took the first two pics below (of patients of ours) so we could see how they're doing! Thanks so much, guys!!!!

We also got an email from the group in Houston with a funny story about how they managed to squeeze a 4-wheeler (and a big one at that) in the back of the 4Runner. It involved planks, trees, and a few concrete blocks. You don't want to know the rest. The other three pics below are of the legal portions of that process.

Anyway, Matt flies to Atlanta tomorrow for a friend's wedding, then to Houston on Sunday. He'll meet up with Don Allison, pick up the 4Runner (with a 4-wheeler inside it) and drive to the Texas-Mexico border. They'll spend the night there and hit the border first thing Monday morning.

If all goes well (and it never does), they'll arrive in Guatemala on Wednesday. Matt will hang out a few days, then fly out of Guatemala City on Monday, arriving in Houston that afternoon. Then he flies back to North Carolina on Tuesday.

We'll try to post some stories from the road once he gets to Guatemala. Hopefully, the trip will be so uneventful that there will be nothing to tell.... But probably not. 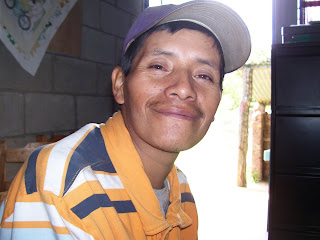 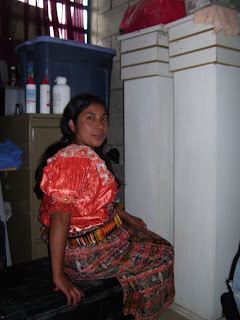 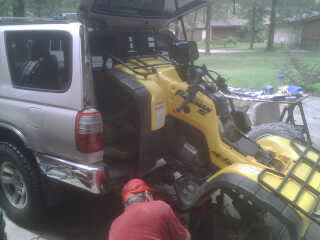 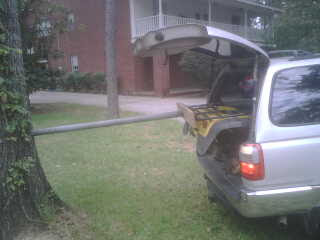 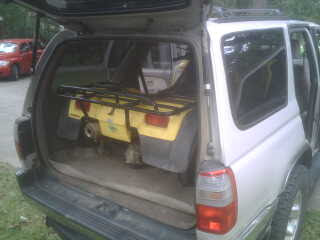 Posted by Agape In Action at 7:39 PM No comments: