After a pretty good night's sleep, it was off to the races in clinic today!  At first I was a little concerned when we "only" had 12 patients, but by the end of the day we were thankful and could see that once again, God sent us just as much as we could handle...


Out of those twelve, we scheduled four surgeries, have four coming back later in the week to review various labs or other studies, admitted one for overnight management of her diabetes (yes, it was THAT bad...), and have at least one that Skip is going to "have" to come back to further care for!!  Although ideally we would see only surgical patients for scheduling this early in the week, it was really a nice mix today--


Please pray for two young couples who have both been married for 10 years with no children~  They are both, of course, heartbroken over it.  One couple will come back with some labs to review later this week and can hopefully be helped with some hormonal treatments.  The other lady, though, will actually be having surgery on Tuesday which may take away any chance of fertility (for you medicalese-speakers, she has at least one large hydrosalpinx and we're hoping it's not bilateral...)


Also pray for our four surgeries that are scheduled:  three "vag-a-thons", which is the affectionate term we use for vaginal surgery that will take several hours for prolapse, plus the young lady with the tube problem and infertility.  Also pray that some more patients will find us if they need help during the week!


Of course, the lady we admitted for diabetes control could use some prayer help as well!  Her name is Manuela, and she really needs some good help with her diabetes... We are very hopeful, since Paul and Lindsey with Agape in Action have a clinic in their town this Tuesday and every month!  So we will get her started on insulin and then send her to them for continued care afterwards.


Last but not least, pray for health for our team-- Nick has a pretty bad cold coming on that we hope to not all catch.  Everyone today was a bit dehydrated with various symptoms but we're working on it and improving.  No one passed out, so that's good, right?  Great attitudes and patience and clinical skill, though, were abundant and I really don't see that changing with this team.  We were able to catch a couple of pictures today, which I will try to post when we get back to the apartment.  (We're at a restaurant for dinner now... It's only 9 pm after all...)

Posted by Agape In Action at 9:04 PM No comments:

One of these times I’ll come up with an original title for the first blog of the week, but obviously today is not that time… For those of you new to the blog, WELCOME to one of the favorite parts of my world~  and—most likely—THANK YOU for letting me “borrow” your loved ones for the week to help here in Guatemala… To those who follow our little adventures regularly, welcome back and thank you!  Your time and prayers really are appreciated.

Today I have the privilege of traveling with a team of four, which is pretty close to a perfect size I think!  There is another attending or senior physician, an OB/GYN resident (From the Wilmington, NC program), and her husband who is a Physical Therapist!  So far I’m the only one who will admit to speaking much Spanish, though, so we will see how that part goes…

Dr. Skip Johnstone has told me for years that he wanted to come down with me to Guatemala, and I’m so thrilled he is finally making the trip!  He trained at ECU a few years back and worked there on faculty with me for a while as well.  He is a very accomplished vaginal surgeon, so this week I get to take on one of my “other” all-time favorite roles—that of a student again!  It’s amazing how God continues to provide these great opportunities for both me and the women we will be serving.

Please pray extra hard for Dr. Johnstone this week, as he had to really struggle with the decision to miss a dear friend and mentor’s funeral today in order to fly down.  Also pray for peace and comfort over Sam Atkinson’s family~  May we truly be honoring to him in our teaching and operating efforts this week, as he was very well-known for both of those things.  Rest in peace after a life well-lived, Dr. A… You will be so missed!

Drs. Amanda and Nick DiSarro were contacts from Julia, who came down on the last trip.  She is a third year resident in Wilmington (same program), and apparently Julia made her experience sound good enough for others to start signing up!  This is a huge blessing to me and the women who need help there in Guatemala~  Once again, God provides.  I’m really excited to have Nick as a PT along, too, as it will hopefully allow an opportunity to re-connect a bit with the PT and Special Needs programs down at ASELSI (another great mission just outside of the town we are working in)—I haven’t made it down there in quite a few years, so I’m excited to go back and reconnect!

Today we have been traveling since around 3 am so far and still have “miles to go before we sleep”.  We should land in Guatemala around 1pm local time (2pm EST), then drive up to Chichicastenango where we will work the first part of the week—about a 2.5 hour drive without traffic, but it usually takes an hour or so to get out of Guatemala City Saturday traffic unfortunately!  Hopefully we will all sleep well tonight and be ready to hit the ground running tomorrow! 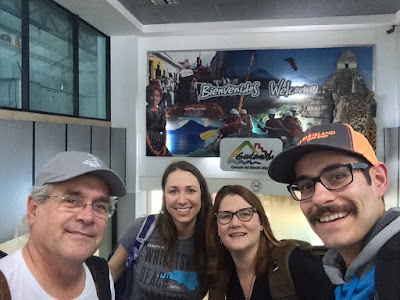 Posted by Agape In Action at 9:54 PM No comments: