We're still having problems loading pictures - it only took about 8 tries to get these up. Yuck!

Anyway, today was our monthly clinic in Nueva Santa Catarina. It's nice to have help out there because it can be a long day. It's a two hour drive out and a two hour drive back, plus the clinic itself. Isaac needs a little more attention on days like that and when we have help (like Charlie), Matt can attend to Isaac while Heidi attends to patients.

As we write this, we're actually getting some rain! Since we're still in the dry season, this is pretty unusual. We'll take it, though. It'll at least knock down some of the dust and dirt in the air. We'll have some beautiful views tomorrow!

While we were at clinic, a backhoe came to work on the foundation of the addition. It was originally scheduled to come on Saturday, but Guatemala being Guatemala, it came today.

Oh yeah - clinic. Our possible osteomyolitis patient came back today. It's not improving with meds, so we'll refer him to our orthopedic surgeon friend who comes to ASELSI every month. We saw a baby or two whose mom we saw as a prenatal patient.

A pregnant woman with high blood pressure we've been seeing is still hanging in there. She's now at 33 weeks. She still doesn't have any protein in her urine but the blood pressure isn't getting better. Matilde (the pastor and translator there) is going to see her every couple days and is planning to take her to the hospital if anything changes. He's also working on her spiritual life. She's not a churchgoer yet, but we'll keep praying for her.

Also, the young woman we wrote about a few months ago who came in with an obvious HPV infection (she's single and a member of the church - she told us in a different setting with a translator other than her pastor that she was raped) seems to be completely healed up. Praise God!

We actually did see a couple of diaper rash patients today. That's a little unusual here because our patients can't normally afford disposable diapers. They usually use a cloth rag tied around their waist with a belt. Luckily, we had some of Isaac's diaper rash cream with us, so that went out the door.

The pictures are a little out of order because we had to upload these one at a time and they got scrambled. Anyway, the first one here is a shot from the roof of the house of the construction zone. It's amazing how much dirt comes out of a trench, isn't it?

The second picture is what happens to Jake when he gets too close to Isaac. Isaac REALLY loves his big brother - often to his big brother's detriment. We watch very closely, but Jake has yet to even act like he's going to defend himself. He usually won't even get up and leave until he's been thoroughly molested.

Next is a shot of Isaac right after he woke up from his 90 minute nap during clinic. The back end of the 4Runner makes a perfect place for him to sleep - especially if you tie a reboso over the window to keep the sun out. After he woke up, he entertained all the neighborhood kids by... well... sitting there and playing with a plastic ring. Slow day in Nueva Santa Catarina.

And last is Charlie with our favorite little girl from out there (Sandra) and her mom. They are about the only Mayans we've ever gotten to smile for a picture. Usually Mayans will be all giggly and smiley and the moment you break out the camera they get completely serious. Exactly the opposite from what we're used to!

Tomorrow is a day off. We'll be supervising some more work on the construction project and probably seeing a patient or two who just called to let us know they'll be dropping by. 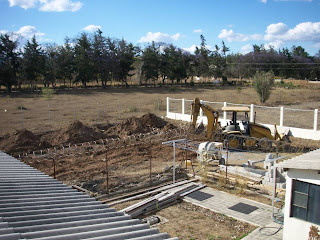 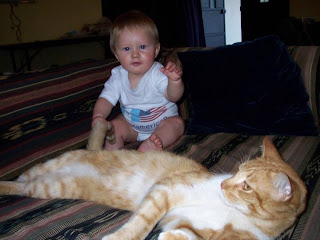 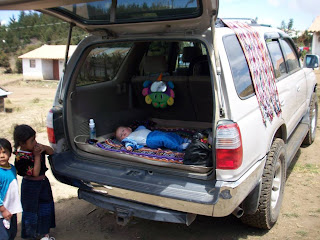 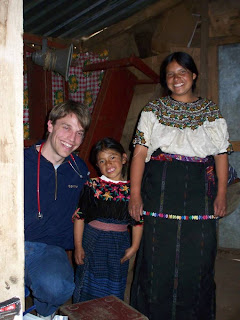 Isaac looks so long!! Nothing like a good nap to make everyone smile!

Hugs and love to all,
Mom