Jungle Trip - Last One for Today

First is Rachel crossing the mouth of a spring where we "bathed". This means that we sat in three inches of freezing water and did our best to wash off the day's funk.

Second is Isaac just hanging out. Note that Matt's head is significantly higher than the level of the beams - a fact he managed to forget at least once.

Third is Duane with a couple of schoolkids who were our de facto guides. Very few adults in the area speak Spanish but most of the schoolkids do. The guy who was helping to sell numbers had to step out for a few minutes this morning when he saw his son running across a field and playing instead of being in school. He explained to Matt later that it's very important for the kids to be in school, even if the kids don't think so. There are no truant officers, so the parents have to police the kids themselves.

Fourth is a sheet hanging over the door of the local church. We projected the "Jesus" film overdubbed in Ke'kchi on that door last night. The entire town showed up and sat in complete silence through the entire film. One guy told us that no one in the town had ever seen a movie before, let alone one in their own language. We're hoping to go back in a few weeks and have them invite some neighboring villages who are in the same situation. (Note the "ladder" underneath the screen.)

And last is a picture of the runway. The local people had done some pretty significant work at Duane's direction to widen the runway and fill in some potholes. Even then, at one point (in the middle of the picture), the runway was only about 6-8 feet wider than the plane. That's a little too tight when you're coming in and out as fast as we are. So Duane, Matt, Tomas, and some local guys climbed down the cliff there and chopped back the foliage with machetes this morning to get it out to a little more comfortable width. 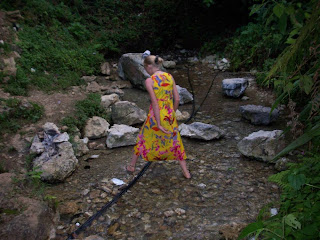 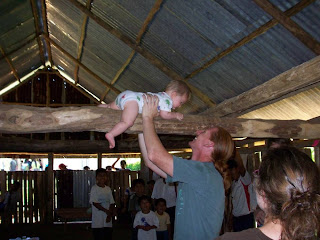 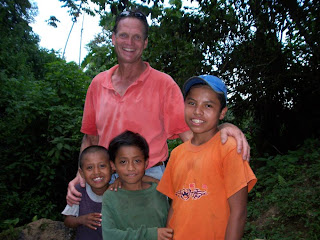 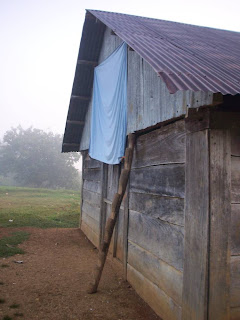 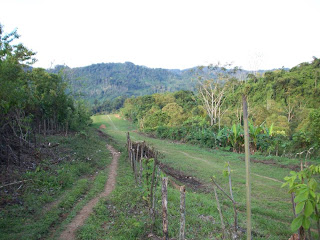 we are glad that every thing went well. That runway does not look like anything that I would want to land on. The Lord definitely had his hand on the group.
-Russ

It is so great to hear your update on the trip to Zona Reyna. It looks like you were kept quite busy. Glad Isaac was entertaining, and I am praying for the people you had the opportunity to share Christ with.

Thank you all for all you do. And for giving such quick and good reports. Blessings

I can't tell much difference between the footpath and the runway. If the village keeps the foilage beat down by machete no wonder they have so many aches and pains. You have had quite an adventure. And Isaac is getting so big! Is Hannah on a break between school sessions?