This morning, Heidi and Charlie headed to Chichicastenango for her OB/GYN clinic. Charlie is going into Orthopedic Surgery, so it's not exactly up his alley, but he IS a medical student and all types of learning are useful.

Fortunately (or unfortunately), depending on how you look at it, they only had one patient. It was a Christian lady who Heidi diagnosed with a miscarriage last year. This time she had better news. She's pregnant with what we hope will become her 8th living child. It's a very nice family. The husband was hit by a car last year and walks with two canes, but he credits God with his ability to walk at all. When you take away all the "stuff" we have in the U.S. and all the "scientific explanations" we have, you find that God moves in more obvious ways.

When God moves, He wants you to know it was Him. Sometimes in the U.S., we don't give God "room to work". Not that He can't work or doesn't work, but we often feel like we have other explanations for the things that happen. We can credit medical science or luck or whatever, but when a man is run over by a car, receives little to no medical attention, and can later walk, even when it's with canes, it's a little more obvious that there was some supernatural intervention.

Anyway, some more pictures of the construction project. In the first pic, you can see that the guys were burning off the tall dead grass that is in the way of their work. It hasn't really rained here in about five months, though, and things are awfully dry. That's why you can see a guy in a yellow shirt RUNNING on the left side of the picture. He's trying to fill a bucket to get control of a small chunk of that fire that got away from them a little bit. Note the horses on the other side of the fence - owned by the guy who has that very nice house in the background. He's a lawyer. It would probably be best if we didn't barbeque his horses.

Next, you can see that guys marking off where the foundation will go on the extension. Tomorrow, a backhoe will come in and dig out the footings. This ground is HARD and full of football size rocks. The builders' original idea was to dig it out 80cm deep by hand. Duane, David, and Matt suggested that perhaps a backhoe would be better (and cheaper - even though manpower here is pretty cheap - around $13 per man per day).

The third pic is for Roy to see that we are actually using the plans he sent down. Of course, one guy is looking at them upside down, but these are details.

Matt climbed on the roof and got a couple shots of the layout just so you could see where everything is going to go. Roy, if it doesn't look right to you, please call immediately, as they start digging tomorrow! ;)

We leave at 6am to go to Canilla for the weekend. More stories and pics to follow! 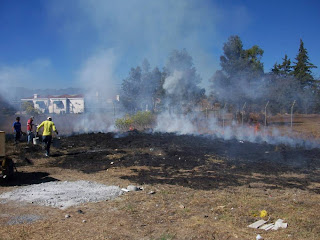 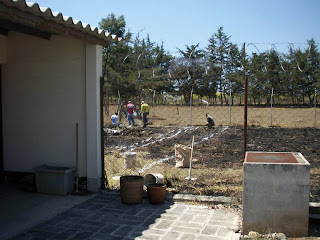 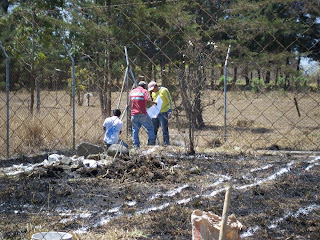 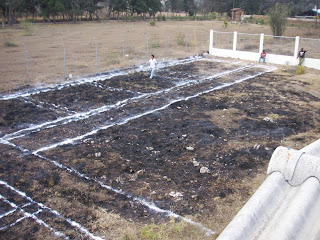 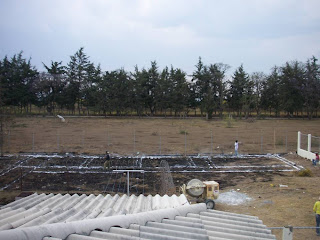 I love to see construction!!

Is there enough room between back wall of building and fence so the exterior can be painted and windows opened? A small person with no ladder might be able to squeeze in there.